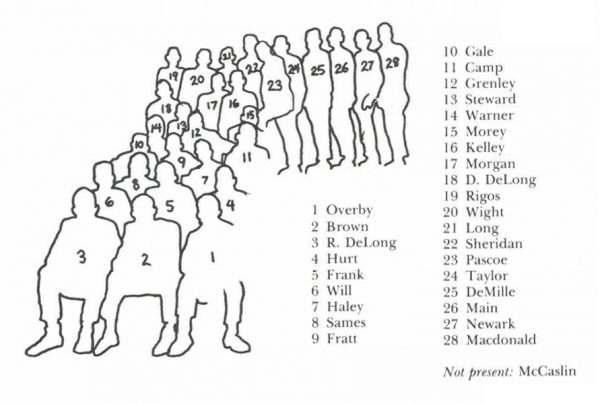 When 28 members of the senior class gathered in the Upper School for this photo in 1965, they were undoubtedly as full of anticipation and excitement for the future as the Class of 2019. And though their work as scholars was noted in the pages of their yearbook, those accomplishments were not central to their value to Charles Wright Academy. In his letter to the class, Headmaster Ted Sanford instead lauded the seniors for their gifts of character—enduring qualities that would carry them forward through life and that he thought were responsible for the school’s “high spirits and high morale.” These first thinkers, communicators, collaborators, innovators, explorers, and stewards set the tone for all future Tarriers to come, and CWA continues to benefit from the ardor and spirit of those remarkable first students and educators.

Farewell, original seniors! I find it difficult to believe that, after all this time, you really will not be around next year. For six years I have taught, coached (sic.) and headmastered you; with you, individually and collectively, I have scolded and commended; pleaded, cajoled, reasoned and exhorted; congratulated and commiserated; threatened, punished, bribed and rewarded. Life will be somewhat less full after your departure!

I am sure you feel I have often been difficult and unreasonable. Perhaps some day I may be forgiven haircuts; “senior week”, no doubt, never!

For my part, you have, at times been obstreperous and contrary. And, although most of you have been pretty good students and reasonably hardworking, you will probably not be remembered by posterity as the most brilliant group in Charles Wright’s history.

Yet the school has been very fortunate in having you as our original seniors. You have some wonderful qualities which have rubbed off on the rest of the school.

You have sest standards in many areas which will take quite a lot of “living-up-to” on the part of classes following in your footsteps. You delight in physical activity and your keen competitive instincts have been a spur to the school in developing an athletic program sufficient to contain you. Your dramatic talents have been largely instrumental in getting theatre, at Charles Wright, off to a flying start. On the playing fields and on the boards, you will be sorely missed!

In personal honor and integrity, and in possessing the courage which is essential to these qualities, you have been outstanding. Even as younger boys and at times when, owing to your sins, honesty would complicate your lives considerably, your veracity has always been unimpeachable.

And you have always had the most wonderful optimism and propensity for focusing on what is good in life. Cynicism and complaint have been foreign to you. These qualities have been coupled with personal warmth, good spirits, and a high degree of loyalty to one another and to the school.

I think Charles Wright has been most fortunate over the years in being characterized by high spirts and high morale. If so, this has been largely owing to the tone which you have set as our original seniors.

You will be missed.